Stanton Wells & Stone LLC has done multibillion dollars in real estate transactions as a residential and commercial broker, investor, syndicator and real estate developer domestically and internationally with a focus on the Manhattan real estate market.

Manhattan’s residential real-estate boom may be back.

Co-op and condo prices have powered higher so far his year at or above the levels recorded in the spring of 2008, when prices last peaked—only to crash a few months later. 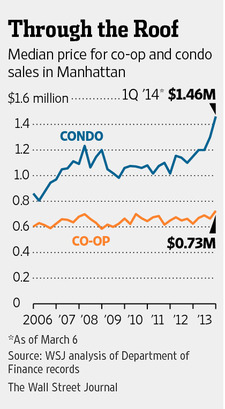 This time, brokers say, the boom seems broader. Apartment listings are in short supply, and prices are up strongly for both jazzy new developments and resales in older buildings, an analysis by The Wall Street Journal found.

The median price was $1.46 million for a Manhattan condo so far in the first quarter and $725,000 for a co-op, both records highs for Manhattan, the analysis found.

Figures for the first quarter of this year include closings filed with the city through March 6.

The average price of a Manhattan apartment was $1.77 million.

The run-up in prices continues a trend over much of the past year. Well-priced apartments quickly attract multiple bids, brokers say.

"We are only in the middle of the cycle," said Donna Olshan, a broker who tracks luxury apartment contract signings. "The risk to buyers is that they get left in the dust, waiting for prices to come down."

The push upward reflected solid employment growth in New York City in the past year; the wealth effect related to the hot stock market; and the city’s continuing status as an international destination for the world’s well-heeled, said Gregory J. Heym, an economist with Brown Harris Stevens and Halstead Property.

He said it was too soon to tell whether the upward trend would continue, but given the economy and lack of listings "it is not surprising that prices are going to escalate."

To be sure, some of the rise in prices so far this quarter—and at the end of 2013—can be attributed to closings for expensive apartments that have long been in contract in new condominium developments such as One57 on West 57th Street and at One Madison in the Flatiron district. But the number of such closings is due to rise significantly this year as more apartments in new buildings are completed.

In the last boom, sales of existing apartments lagged far behind sales of apartments in new developments. Some buyers lined up, checkbook in hand, for new sales offices to open. Brokers say prices now are strengthening across the board: Median prices for resales of co-ops and condos also set a record, the report found.

The median condo resale price was $1.3 million, the analysis found.

But buyers remain concerned about overpaying, and some overpriced apartments are lingering on the market, said Hall Willkie, the president of Brown Harris Stevens.

Strong resale activity can be seen at the Prasada, a Beaux-Arts building on Central Park West and West 65th Street. A 12-room penthouse was listed there for $48 million in mid-October by Robby Browne of the Corcoran Group and John Burger of Brown Harris Stevens. It just went into contract, several brokers said, below the asking price but likely above the $33 million record for a co-op on the Upper West Side.

Another smaller, high-floor apartment in the building was listed at about the same time for just less than $5 million and sold at a premium to the first person who came to see it.

Lisa Lippman, a broker at Brown Harris Steven who represented the buyer, said the buyer asked how much money it would take to immediately take the listing off the market. They quickly made a deal for about 10% above the asking price, said Marcy Grau, the listing broker at Stribling & Associates.

Ms. Olshan found that the number of new signed contracts for apartments and houses listed for more than $4 million was up 9% during the first nine weeks of 2014, compared with the same period a year earlier.