Stanton Wells & Stone LLC has done multibillion dollars in real estate transactions as a residential and commercial broker, investor, syndicator and real estate developer domestically and internationally with a focus on the Manhattan real estate market. 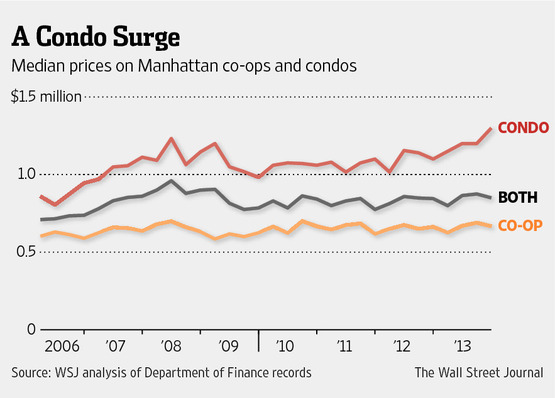 The sale price of Manhattan condominiums set a record in 2013, fueled by trophy properties that helped push prices higher than even the last real-estate boom, city records show.

They were driven higher by closings in new condominiums such as Walker Tower, in Chelsea, and 18 Gramercy Park—developments with large apartments created for wealthy New Yorkers and international buyers, brokers said.

There were more than 50 closings averaging $8.9 million or more in just four expensive new projects in 2013, sales data shows. The year ended with the median condominium price setting a record of $1.3 million in the fourth quarter.

The average price also set a record in the fourth quarter of $2.14 million, according to an analysis of city records by The Wall Street Journal. The most expensive unit was a $42 million penthouse at 18 Gramercy Park. 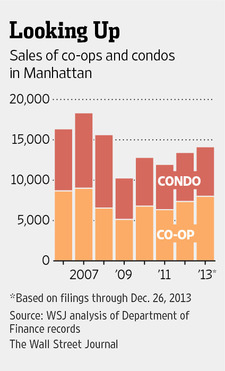 “The market in the city is really on fire,” said Dottie Herman, the president of Douglas Elliman. “All the stars are aligned. As long as we keep the city safe and clean and healthy we are looking at a great future.”

The overall Manhattan apartment market—including sales of lower priced co-op apartments—also rose, but more modestly during 2013, reaching their highest levels since a peak set in 2008, before the Wall Street crash and the end of the last real-estate boom.

Co-op buildings are typically older than condos and make up about two-thirds of apartment sales in the Manhattan. Their sales were roughly flat, at $667,000 in the fourth quarter.

As a result, the gap between what buyers pay for condos versus co-ops rose to its highest recorded level. In the fourth quarter, the median condo was nearly double the median co-op price.

Brokers said the statistics were driven up in part by a rush of closings in expensive condominiums that have been in contract for many months. This was similar they said, to what happened in 2008, when closings at two prime properties, 15 Central Park West and the Plaza Hotel on Fifth Avenue and Central Park, pushed average and median prices higher for several quarters.

At 135 E. 79th St., a new 19-story limestone and brick building between Park and Lexington avenues, 14 condos closed for an average price of $9.07 million beginning in October, property records show.

The condos at Walker Tower, a conversion of the upper floors of a telephone company exchange building on West 18th Street, began closings in November. So far 21 condos have closed for an average price of $8.9 million, property records show.

Hall F. Willkie the president of the Manhattan brokerage firm, Brown Harris Stevens, said the statistics were driven by “spectacular big trophy sales.” But he said that many buyers remained more cautious than they were in 2008 and that inventory was tight. He said buyers were “price sensitive at all price points.”

There was a concern in the industry, he said, that buyers were being even more cautious about bidding up properties, because of uncertainty over the business and fiscal climate as New York goes through a mayoral transition.

The soaring Manhattan home prices came during a year that New Yorkers elected Bill de Blasio, who ran on a mayoral platform of narrowing the gap between the rich and poor and producing more affordable housing. Mr. de Blasio takes office Wednesday.

Sales of the most expensive co-ops lagged in 2013, with the highest co-op sale on Park Avenue so far this year at $24 million, compared with 2012 when there were three sales for $50 million or more.

Some brokers attributed the flat co-op prices to a shortage of listings of high-end co-ops; others to changing tastes in favor of new condos with big windows and high ceilings.

Kirk Henckels, director of private brokerage at Stribling & Associates, said that co-ops had been a “very successful housing system” but need to address buyer perceptions. Co-op board rules, for example, are often much stricter than in condos, and many co-ops put potential buyers through a grueling approval process.

Sales figures are likely to remain strong or move higher during the next few years, several brokers said, because buyers have already signed hundreds of contracts on expensive apartments that won’t close for many months or even years. Among the high-profile buildings expected to have closings in 2014: luxury skyscrapers such as One57 in Midtown.

Donna Olshan, a broker who tracks luxury contract signings, said that 1,372 contracts had been signed in 2013 on properties listed for $4 million or more, or a total of nearly $10.9 billion. That represents a 70% increase on such contracts signed in 2012.

Of these signed contracts, 38% of them were sold off of floor plans of unfinished buildings.

At the Charles, a new 32-story condominium tower on First Avenue near East 73rd Street, a single buyer signed a contract to buy three separate apartments on the top four floors, listed for $37.9 million, according to a condominium filing on Monday.

The 11,747-square-foot apartment isn’t due to close for another year.